Any paddler who has been out in big water and experienced a large breaking wave dumping onto his kayak knows that it can feel like a ton of bricks. And you’re not far off: “If a 1-meter high column of water lands on a ship’s deck, it exerts a static force of 1 ton per square meter (204 pounds per square foot); the dynamic load is even greater and damage can result.” So writes Craig B. Smith in “Extreme Waves”, a book which attempts to apply the quantitative observational precision of science to what is admittedly the disordered and chaotic environment of big water.

“Extreme Waves” delves into the underlying physical forces which drive wave action on the surface of the ocean and other large bodies of water, with excellent descriptions of the primary parameters of height, shape, pattern, and behaviors of waves of all sizes. Smith explains how two different wave patterns can come together and either cancel each other out (destructive interference) or combine to create larger waves (constructive interference). Groups of waves which may seem utterly random are often in fact comprised of distinct and measurable components and harmonics.

It was intriguing to read, for example, a description of the tumbling or elliptical motion I’d noticed many large waves commonly exhibit, wherein the energy of a moving wave rolls forward, seemingly dissipates and briefly submerges, only to reappear a moment later, seemingly behind its own deep trough.

In his discussion of the Rayleigh distribution chart—sort of a Bell curve of wave heights—the author demonstrates that the statistical likelihood of a significantly larger wave (defined as 1.6 times as high as the average wave) is 13.5 percent, or about one in seven, lending scientific credence to the old sailor’s and surfer’s lore that every seventh wave in a set is larger.

As an upper Midwest paddler, I was quite interested to see a short section on Great Lakes wave dynamics, as these unique bodies of water can be considered neither inland lakes nor oceans, but have a character all their own. Smith calculates that “a steady wind of 30 knots blowing for 23 hours over a minimum fetch of 243 miles (about the length of Lake Michigan) will produce waves that are 19 to 34 feet high.” But, he adds, as winds in excess of nearly 90 miles per hour have been recorded, when these waves come into the shallows near shore, one could reasonably expect to encounter “fully developed seas.” The author also mentions oceanic and Great Lakes seiches, unusually large waves caused by low-pressure weather systems forcing water into a bay or harbor. In Chicago in 1954, such a seiche sent a sudden ten-foot wave rolling in from Lake Michigan, sweeping eight fishermen from a breakwater and drowning them.

No book on extreme waves would be complete without accounts of large ships encountering daunting weather conditions. Smith recounts how the Queen Elizabeth 2, a 963-foot cruise ship, was struck by Hurricane Luis in 1995, riding out a 95-foot wave which the captain described as “a giant wall of water, like running into the white cliffs of Dover.”

“Extreme Waves” can be a bit dry at times (no pun intended), with lots of charts and graphs and mathematical calculations of wave physics. While the wave prediction studies may be of less interest to paddlers than to sailors and mariners, the book is generally well organized, and the hard numbers are well interspersed with juicy tales of rogue waves and adventures at sea. It may not be enough to keep you ashore, but you’ll likely not look at the water the same way after reading “Extreme Waves.”

If you purchase a product or service linked to from this site, I may receive an “affiliate commission.”
Book Reviews Weather
Tags : waves
← Next Post
Previous Post → 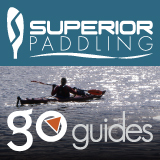